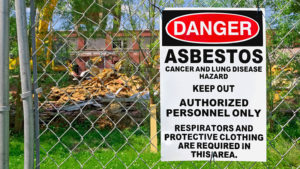 Why can Asbestos dust or fibres be dangerous to your health?

Asbestosis is a serious, chronic, non-cancerous respiratory disease. When you inhale asbestos fibers they aggravate lung tissues, which cause them to scar.

Symptoms –  shortness of breath and a dry crackling sound in the lungs while inhaling. Cardiac failure can be caused in its advanced stages.

There is no effective treatment for this disease.

This causes the most number of deaths related to asbestos.

Symptoms – Most common symptoms are coughing and change of breathing. Other symptoms can be shortness of breath, continuous pain in the chest, hoarseness and anemia.

If you are a smoker and exposed to asbestos there is a greater chance of developing lung cancer.

This is a rare form of cancer. This often found in the thin membrane of the lungs, chest, abdomen and (rarely) heart. Almost all the cases related to this disease are due to exposure to asbestos.

Symptoms – the first symptoms of this disease include chest or abdominal pain, bloating, and shortness of breath. These symptoms vary based on the location of the cancer. However, doctors often mistakes them as normal aches and pains or symptoms of non-serious illnesses because of the slightness of the early-stage signs.

There are evidence that cancers in esophagus, larynx, oral cavity, stomach, colon and kidney can be caused by swallowing or absorbing asbestos. 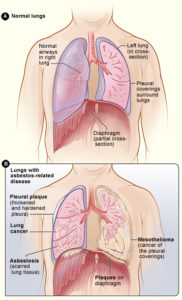 To be in the safe side book an Asbestos audit with Seymour Consultants.